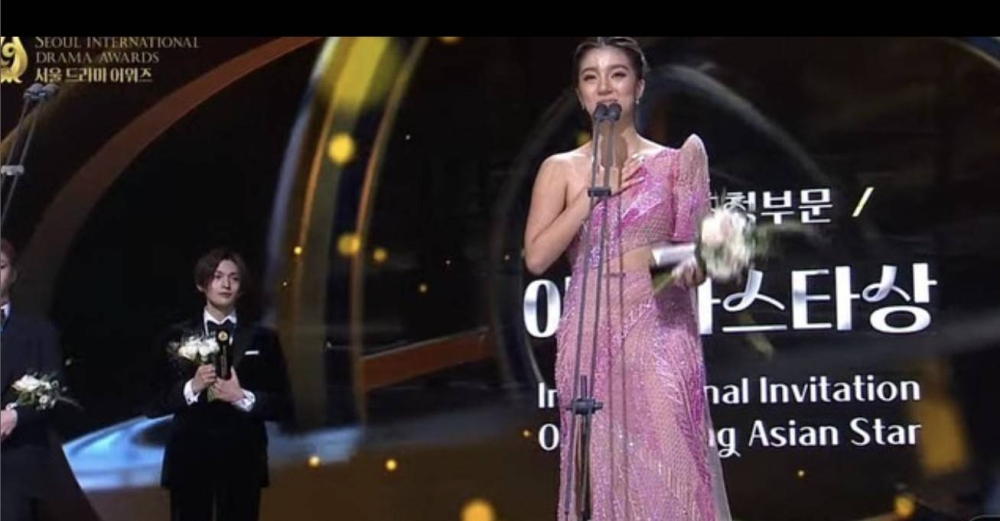 ACTRESS Belle Mariano on Thursday made history as the first-ever Filipina recipient of the Outstanding Asian Star award at the Seoul International Drama Awards 2022.

Mariano walked the red carpet and personally accepted the award wearing a pink Filipiniana gown with an off-shoulder neckline and a thigh-high slit by Francis Libiran.

In her speech, Mariano proudly introduced herself as a “proud Filipino.”

She thanked the award-giving body, the makers of the hit series “He’s Into Her” and her onscreen partner Donny Pangilinan.

“Thank you for giving me this life-changing opportunity. To my bosses and management, Star Magic and Rise Artist Studio, thank you. Thank you as well for the cast, production crew of ‘He’s Into Her.’ Maraming, maraming salamat (Thank you very, very much). Of course, to my partner Donny Pangilinan, it has been an amazing journey with you. Here’s to more and I share this honor with you,” she said.

“Of course, the supporters as well. I will not be here without you guys. Lubos po akong nagpapasalamat sa inyo (I am extremely grateful to you). And lastly, to the woman who molded me to the woman I am today, my mother, thank you so much. I love you, mahal ko kayong lahat at mabuhay tayong lahat (I love you all and here’s to long life for everyone),” Mariano ended.

The 20-year-old star is just one of the five recipients of the award. She also beat out nearly 200 other Asian artists like China’s Wallace Chung, Japan’s Yusei Yagi, Taiwan’s Alice Ko, and Thailand’s Krit Amnuaydechkorn.

The news on Mariano’s win was first announced by Rise Artists Studio on September 6, after a month of voting on South Korea’s Idol Champ.

Starting out as a commercial model, Mariano made her acting début when she appeared in “Lorenzo’s Time” in 2012. After that, she began appearing on various TV programs such as “Maalaala Mo Kaya” and “Princess and I,” “Goin’ Bulilit,” “Juan dela Cruz,” “Bagani” and films “Can’t Help Falling In Love,” “Four Sisters Before the Wedding.

She became even more popular after being partnered with Pangilinan as “DonBelle” loveteam. Among their films together include “Love is Color Blind,” “He’s Into Her: The Movie Cut” and the upcoming “An Inconvenient Love.”