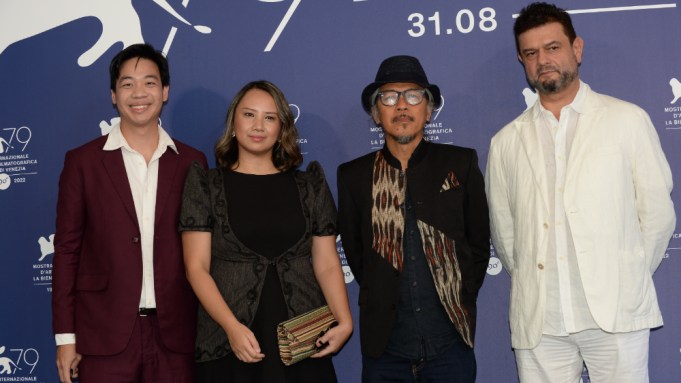 Fresh off a standing ovation for auteur Lav Diaz’s “When the Waves Are Gone” at the Venice Film Festival, the Philippines’ Epicmedia Productions has revealed a global co-production slate.

Next up is Swiss co-production “Electric Child” by Simon Jacquemet (“The Innocent”), which was presented at the Venice Production Bridge last year. The story revolves around a couple whose child develops an unusual illness. While the mother and baby drift into their own world, the computer-science professor father develops a pact with an A.I. character on a virtual island to save his child. The project, which is starting production imminently, is supported by the Film Location Incentive Fund of the Film Development Council of the Philippines, the Swiss Federal Office of Culture, the Zurich Film Foundation, Filmstiftung NRW and TV channels SRF and ARTE.

In development and financing with Revolver Films is Dutch film “Mandai River” by Michaël I. Sewandono (“Arash”), which was at EAVE Ties That Bind and Cannes Cinefondation, and will follow three characters whose fates tragically entwine when they are overpowered by chaos and mystical forces of nature beyond their control.

Filipino film “Filipiñana” by Rafael Manuel, where a new girl looks to subvert the rules in a club that reflects Philippine societal structures, is in development and is supported by the U.K.’s Channel 4, the CreatePH Development Fund and Talents Tokyo Next Masters Support Development Fund. Manuel won best short at Berlin for his short film of the same name.

“In My Mother’s Skin” by Kenneth Dagatan (“Ma”), about a 10 year-old girl who tries to protect her flesh-hungry mother, cursed by a magical fruit from a sinister fairy who desires to consume them all, is in post. The film is supported by the Film Development Council of the Philippines, IMDA Singapore, TAICCA and won the Discovery of Asia Award at the Bucheon International Fantastic Film Festival’s NAFF Project Market. It is co-produced by Zhao Wei Films (Singapore), Volos Films and Clover Films (Singapore), which also handles Asian distribution.

“Epicmedia’s goal has always been about strengthening collaborations within the Southeast Asian region and helping filmmakers, not just Filipinos, in bringing their films to the global stage,” Liew told Variety. “Not bound by borders, but rather by the very essence of story-telling, chemistry, friendship, creative force.”

Meanwhile, Balbuena, who is a former Asian Film Commissions Network producer of the year and Asia Pacific Screen Awards outstanding achievement in film awardee, has made a career move to Globe Telecom-backed Kroma Entertainment as head of studios and MD in charge of the Anima and Secret Menu brands.

“Co-production is a delicate marriage. The material should speak to you, you should believe in the director’s vision and artistic execution. But at the same time, you should love working with your co-producer because you’ll be fighting for a project hand-in-hand for a number of years. We’ve been very lucky with our co-producers,” Balbuena told Variety. “I don’t think there has been any bloody divorce yet.”

“We are excited to bring Filipino content and talent to the world stage, work on strengthening our content library, discover new exciting voices, help bring back audiences to local cinemas and bridge the gap between local content and international streamers”, Balbuena said about her new role.